It was early in the morning, and the morning haze had only began to break over the waking city of Manila. A bus with seats too small and shelves stocked with books maneuvered the narrow veins of Manila, bringing us (Ate Charlot, Kat, Mark and I) to Barangay Tayuman.

We squeezed through the even narrower barangay roads until the warm smile of the barangay captain and excited faces of children greeted us. The bus parked under the shade of a tree with outstretched branches and our half day of storytelling, arts and crafts, and child management began.

As we opened the bus doors to get down and stretch, children hurriedly climbed onto the bus, quickly scanning the shelves for a book that tickled their interest. Once they had done so, they settled themselves on the seats which fit each one of them perfectly; all this happening in a matter of seconds. There were petty arguments amongst the children, and the occasional tugging, but otherwise, they were intently reading the morning away. It was a fantastic sensation to know that kids can still get excited about sitting down and reading a storybook in the age of play stations, internet and television.

Storytelling followed and magically, Ate Charlot had gotten all the kids to sit down and get quiet. There were more children than expected, so some of them had to sit down on the street. All of the kids were captivated by the underwater world Ate Charlot had enacted. They were later asked comprehension questions about the story, to which they enthusiastically shot their hands up in the air to answer; doing their best to grab Ate Charlot's attention.

As the morning wound down with arts and crafts and champorado, it was surprising to note that the children had arranged themselves in such a way that the littlest kids were first in line, followed by the girls and the lastly the boys. This was ultimately the highlight of my trip: the courtesy and gratitude these children demonstrated for the activities and treats.

I thoroughly believe in the effectivity of Museo Pambata's Mobile Library, that in bringing children closer to literature, they grow, develop and learn things about themselves by letting their imagination free.

It’s More Fun to be in MP’s Mobile Library


Children are one of the precious gifts God has given us. As a preschool teacher, I believe that children must be exposed to different stories inside or even outside the classroom. This is one way of teaching them significant values and meaningful experiences necessary in their growing years. There are lot of institutions offering a helping hand to enhance the literacy skills of our children One of which is the Museo Pambata (MP) – where learning begins and fun never ends.
Last May 19, 2012, I was able to be part of Museo Pambata’s “Mobile Library”. I used to volunteer as storyteller in MP thus, when I heard about their mobile van carrying books to be shared among children around Manila, I immediately join without any hesitation. When I first entered the mobile library van, I was amazed by how the books were arranged inside. My mind made me realized how blessed the children were. During the trip, I couldn’t hide my excitement to Ms. Charlot, MP’s Library Coordinator. When we reached the place, I have seen lots of children waving their hands as the van approached them. The place was located at Brgy. 412 Legarda, Sampaloc, Manila. There were around 35-40 children of different ages. When the children saw us, they were all smiling and asked us if they could go up see the books inside. We told them that there will be a time for them to borrow and read books of their choice.
Selected Brgy. officials helped us also in facilitating the place and the children. Children were seated on monoblock chairs. One of the brgy. officials introduced us to the children. Afterwards, Ms. Cha gave me a signal to finally tell the story. I personally chose “Si Emang Engkantada at ang Tatlong Haragan” as this story shows love and care for the environment. During the storytelling, the children were listening attentively. Seeing them that way made me realized how important stories were to them. Stories that can capture their young and imaginative minds. After the storytelling questions were asked by Ms. Cha. Children who were able to answer the questions were given simple prizes. An art activity followed the storytelling session. Children were asked to make flowers out of colored paper, glue and straws. When they finished, they gave the flowers to their moms as “thank you” present. How happy to see mothers smiling and feeling proud after their sons/daughters gave them the flowers. After the flower making activity, snacks were served to the children. Everybody was eating happily even those people who passed by the place. When snacks were over, children were allowed to borrow books from the mobile van. Some read by pairs, others read on their own. It was nice to see children getting hooked by reading the books. When they were done, they return the books again back to the mobile van shelves. Group picture taking happened after. Finally, children were given simple token for their participation. The day ended with a big smile for each one of us. As the mobile van about to leave the place, I could still hear the children shouting “bumalik po uli kayo ate, kuya, titser ha!!”. We left the place full of joy and hope that one day we’ll be back again in Brgy. 412.


I went home happily and fulfilled as I was able to share myself to those underprivileged children even in my simplest way of telling them a story. And this would not be possible without the Museo Pambata’s Mobile Library. May they continue their advocacy in children’s literacy to be able to cater more and more children in and out the Metro.
It was such a great moment to be part of MPs Mobile Library.
More powers MP!

Posted by Charlot at 2:58 PM No comments:

Last Saturday, June 29, I traveled with the Mobile Library to Tayuman, Tondo as a volunteer during one of Museo Pambata’s Saturday Outreach Activities. Unfortunately, because I am only a short-term volunteer from the States, the trip was my first and probably only travel with the Mobile Library, for now, at least. Nonetheless, the experience was unforgettable and much more rewarding than any other volunteer work I have ever done before.

Since this post is the first blog entry on the MP Mobile Library Blog, I'll give a brief synopsis of Saturday's activities, which are typical of an Mobile Library Outreach trip. After we arrived at Tayuman, the 40-50 kids lined up and entered the bus a few at a time to pick out books to read. The children read on their own for about fifteen minutes until storytelling began, during which another volunteer read a book to the whole group and awarded prizes to those who had proved they were really paying attention. Then, the group of kids split into two groups for arts and crafts, the younger kids (7 and under) moving to a table to color on coloring sheets, and the older kids (8 and above) receiving materials to make paper bag puppets. After arts and crafts was over, we finished the day with a game of The Boat Is Sinking, during which the winners were awarded more prizes. Afterwards, the rest of the staff, volunteers, Brgy. 156 coordinators, and I went out for lunch.

Unlike any of my past volunteer work with children, the Outreach Activity last Saturday enabled me to help more severely disadvantaged families and children who don't even have sufficient access to books, the foundation of literacy. Arriving at the barangay and suddenly hearing fifty children cheering and yelling because the Mobile Library had finally arrived warmed my heart, as did the twinkling eyes and eager voices of the children as they perused the shelves for a fun book to read. The attention the children gave to Kuya Yuri, Saturday's storyteller, as well as the enthusiasm of their responses to his questions, undoubtedly amounted to more positive energy than is typically present in the average classroom. The children also enjoyed the arts and crafts activities, crayons and glue sticks in hand as they showcased their art skills and creativity. After spending the day with the children in Tondo, I was exhausted yet pleased that I had participated in enriching these children's lives even if it was just for one day.

My trip with the Mobile Library has truly been one of my most memorable experiences from my vacation here in the Philippines. As a seasoned volunteer at several different school and library organizations back in the States, I can easily say that the Mobile Library is a quality program that benefits both disadvantaged families and volunteering members of the community seeking to make a difference. I encourage both teenagers and adults alike who enjoy working with children to sign up to volunteer!

The MP Mobile Library Blog has been a project in the works these past few weeks, and today, we, the volunteers and staff at Museo Pambata, are ready to officially launch our blog.

The Mobile Library is Museo Pambata's library on wheels that travels with over 300 children's books to underserved areas around Manila and other provinces, making learning more accessible for underprivileged children.

This blog, authored by Museo Pambata staff and volunteers, will document the authors' reflections on their experiences with the Mobile Library as well as provide additional resources for people wanting to learn more about the Mobile Library program.

What is the Mobile Library?

The Mobile Library is Museo Pambata's library on wheels that travels with over 300 children's books to underserved areas around Manila and other provinces, making learning more accessible for underprivileged children.
This blog, authored by Museo Pambata staff and volunteers, documents the authors' reflections on their experiences with the Mobile Library as well as provides additional resources for people wanting to learn more about the Mobile Library program. 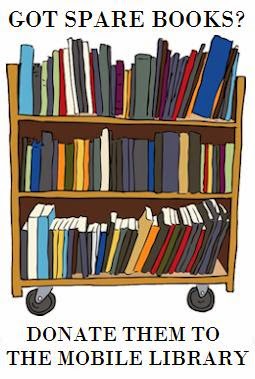